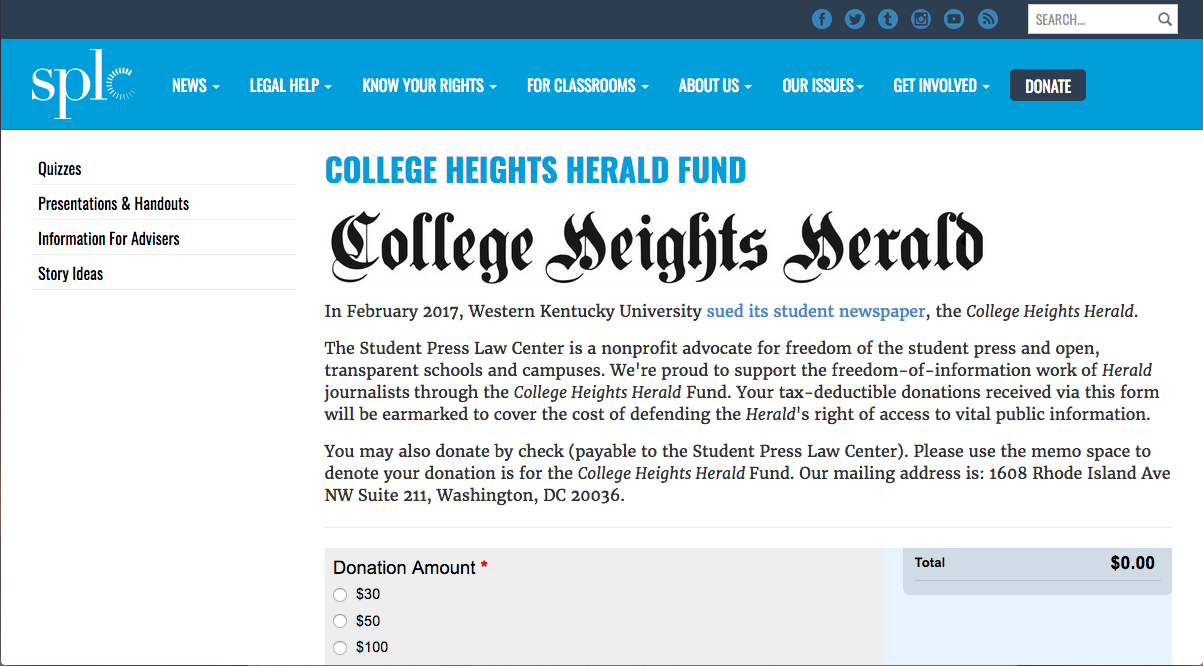 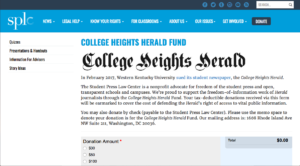 To make a donation to the SPLC, earmarked for the College Heights Herald Fund, go to http://www.splc.org/page/wku. Your donation to help the Herald is tax-deductible.

How we got here:

WKU sued the Herald in February in an effort to keep secret the records of faculty and staff who were found to have violated the university’s sexual misconduct policy.

The Herald requested records from those cases in November, and WKU denied the request. The Herald appealed the denial to the Kentucky Attorney General’s Office, which conducted a review in which WKU also refused to turn the records over to the attorney general for inspection.

The College Heights Herald, represented by Louisville attorney Michael Abate, is defending its position that the records are legally open to public inspection and must be turned over. Both WKU and the Herald have said the case is certain to be appealed, regardless of how Warren Circuit Judge Steve Wilson rules.

This will be a costly legal battle, but one that is essential to fight. We believe WKU’s position of refusing to make public records from closed investigations, redacted to protect any student’s identity, is a violation of the Open Records Act. WKU’s refusal even to produce those records for the attorney general to review in order to make a determination would, if upheld, gut an essential strength of Kentucky’s records law.

We are asking our alumni and friends to again come to the Herald’s aid. You helped in 1988 when then- (and soon to be ex-) President Kern Alexander tried to install faculty editors at the Herald and the Talisman. And you were there again in 2005, when you helped raise more than $1 million to build our impressive home, the Adams-Whitaker Student Publications Center adjacent to the then-new Mass Media & Technology Hall.

To help cover the Herald’s legal expenses from the recent WKU lawsuit, alumni asked to create a Herald and Talisman legal fund in the WKU Foundation. The WKU Foundation turned down that request, saying funds that it houses cannot be used to oppose WKU.

The Student Press Law Center, based in Washington, D.C., then agreed to allow the Herald to establish a fund under its umbrella. The SPLC, headed by attorney Frank LoMonte, is a 501(c)3 organization, meaning donations to the College Heights Herald Fund will be deductible on donors’ income taxes.

We will close out the GoFundMe account that has been out there. Those funds raised via GoFundMe will be transferred into the SPLC Herald account, with the donors’ names attached.

We are setting an initial goal of $25,000 raised from WKU Student Publications alumni and friends. We will work closely with our colleagues at the Kentucky Kernel, which also is being sued by WKU and by the University of Kentucky and Kentucky State University. We will seek support from the Kentucky Press Association’s Legal Defense Fund, which is chaired by alum Tom Caudill of the Lexington Herald-Leader and advised by Louisville attorney Jon Fleischaker, a good friend of WKU Student Publications.

This lawsuit has real implications for every organization interested in open government in Kentucky. It is crucial that we mount a vigorous defense because WKU’s lawsuit against the Herald goes to the very heart of what we teach young journalists do — seek records to assess the power structure and hold the powerful accountable.

We ask that, once again, you come to our aid.