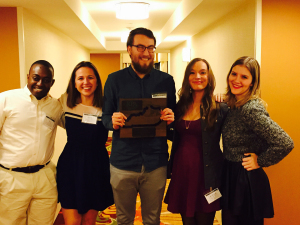 The College Heights Herald, WKU’s student-run newspaper and digital news sites, won the Kentucky Press Association’s top honors for both news and advertising excellence among colleges at KPA’s 2015 winter conference in Louisville last week. The honors come as the Herald celebrates its 90th birthday on Jan. 29.

It is the second year in a row that the Herald has won both competitions among the state’s college and university newspapers. Second place for General Excellence went to The Kentucky Kernel at the University of Kentucky, and third place went to The Murray State News at Murray State University. The KPA contest covered the period from Oct. 1, 2013-Sept. 30, 2014. The Florida Society of Newspaper Editors judged the news contest; the advertising contest was judged by Maryland/Delaware/District of Columbia Press Association.