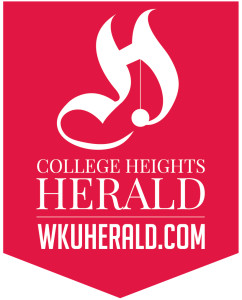 Students in the newsroom of WKU’s College Heights Herald brought home the General Excellence Award for college news organizations – the top honor from the Kentucky Press Association – for the third year in a row Thursday night at the KPA awards banquet.

Herald editors-in-chief during the contest period were Taylor Harrison (Fall 2014), a May 2015 graduate who now lives in New York City; Cameron Love (Spring 2015), a Mount Washington senior; and Kae Holloway (Fall 2015), an Owensboro senior. Herald advertising managers during the contest period were Zachary Tatoian (Fall 2014, Spring 2015), a May 2015 graduate who lives in Lexington; and Mackenzie Grubbs (Fall 2015), a Verona senior.

“I’m enormously proud of our students’ work, the strength of their journalism and their creativity of the business side of the Herald,” said Chuck Clark, director of WKU Student Publications. “Our students are setting the pace for their peers in college news organizations.”

Individual award winners announced Thursday at banquets in Lexington and Madisonville were:

The editorial adviser for the College Heights Herald is Carrie Pratt. The advertising adviser is Will Hoagland.

The College Heights Herald is published in print Tuesdays and Thursdays during the academic year with a circulation of 8,000, and around the clock at WKUHerald.com and on WKUHerald mobile apps for Apple iOS and Android devices.