Some big news for WKU Student Publications: The Talisman website, WKUTalisman.com, has been named a Pacemaker Finalist for online publications. 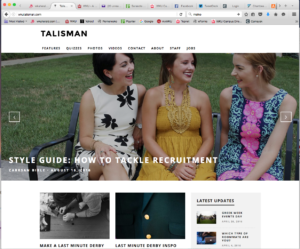 WKUTalisman.com was launched about a year ago as a pop culture site loaded with strong photography, solid writing, quirky quizzes, funny videos — and quickly emerged as a popular WKU version of BuzzFeed. It’s wonderful to see this extremely creative site get recognition as a Pacemaker Finalist — and we’re crossing fingers and toes that it will win the Pacemaker in October!

This is a big year for the Talisman family, as the final printed version of the yearbook is now behind us and it is launching its life as a twice-yearly life and culture magazine focusing on WKU and the Bowling Green region. We have high expectations that the Talisman magazine will be joining the Pacemaker family as well!