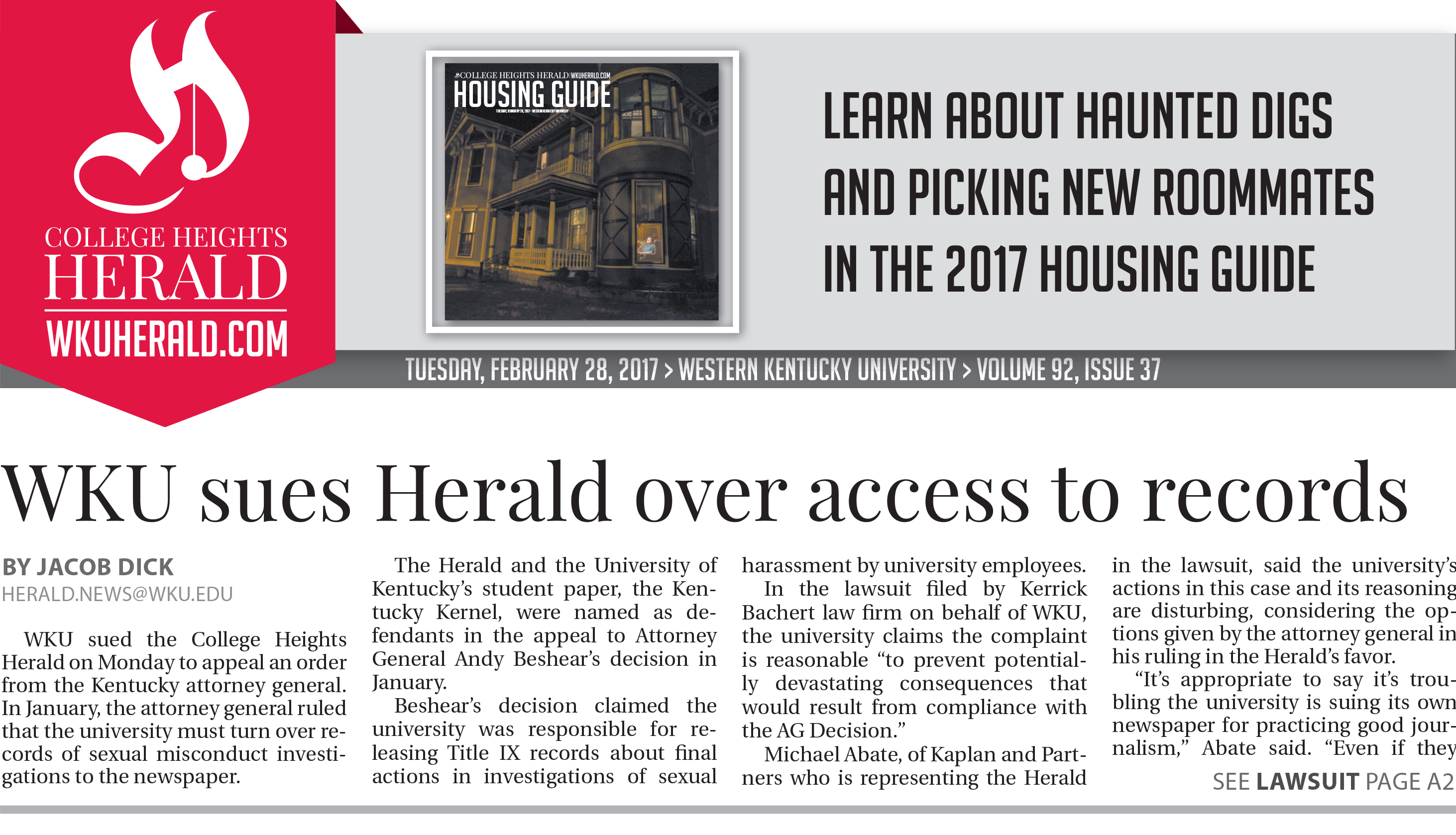 The university sued the Herald and the University of Kentucky’s Kernel newspaper, which had requested the same records, saying it was trying to preserve a climate in which victims felt safe reporting sexual misconduct. You can read the Herald story on the suit here.

The Herald is represented by Michael Abate, a Louisville attorney with the firm Kaplan & Partners. To help with the the student-run effort to cover the Herald’s legal bills, go here.

Nicole Ares, the Herald’s current digital managing editor, in November requested records of WKU’s investigations into allegations of sexual misconduct involving faculty or staff. Although the university denied the request, it said there had been 20 reports and that investigations determined that sexual misconduct occurred in six instances. In each of those instances, the university said, the faculty or staff member either resigned or retired.

WKU contended those separations meant that there was never any final action in those cases, so the records were not public. WKU also contended that the records were protected by privacy provisions of Title IX and the Family Educational Rights and Privacy Act, or FERPA.

The Herald appealed the denial to the Kentucky Attorney General’s Office, which determines how the state’s open meetings and open records acts are applied. The AG’s office asked WKU to produce the records in question for a private review, but the university refused.

In January, the attorney general’s office issued a determination that WKU had violated the Open Records Act by denying the records to the Herald and ordered WKU to turn the records over. Under Kentucky state law, WKU’s only recourse was to sue the party that won the favorable AG ruling and, on Monday, filed suit against the Herald.

In the suit, which you can read here, WKU says its “controversy is actually with the Attorney General and the AG decision, and not with its student newspaper,” but noted that state law requires that any appeal must be by a lawsuit against the prevailing side.

Abate, the Herald’s attorney, told the Herald: “It’s appropriate to say it’s troubling the university is suing its own newspaper for practicing good journalism. Even if they have a valid basis for withholding information, they still have to submit redacted documents.”

Attorney General Andy Beshear told the Herald that he saw key differences between the records the Herald requested and those in a University of Kentucky case against the Kentucky Kernel that a Fayette County circuit judged ruled are private.

“I have serious issues with the University of Kentucky’s lawsuit in that I refuse to believe that hiding every single document about a professor that may be preying on student somehow makes us safer,” Beshear told the Herald. “When you look at the amount of sexual assault on college campuses yet how little of it is reported outside the Title IX system, it means we have to have transparency to make sure our campuses are conducting the investigations in the right way, that they’re treating our victims in the right way, that they are also ultimately seeking justice in the only way to make sure that justice is being provided to us is through transparency. And the University of Kentucky’s lawsuit also threatens the open records and the open meetings act themselves.”

WKU argues that keeping the records secret is necessary to retain a climate where victims of sexual misconduct feel it’s safe to come forward.

The students who run the Herald see it this way: The Herald has told WKU that the student newspaper has no interest in learning or revealing the identities of students or others who were victims in these cases that the university has judged as being sexual misconduct under Title IX. You can read the Herald’s position in this editorial.

The Herald has told the university it would accept the redaction of information identifying victims from those documents.

However, the Herald does have interest in learning the identities of faculty or staff found to have engaged as aggressors in sexual misconduct – and reporting on what if any corrective measures the university took in these cases.