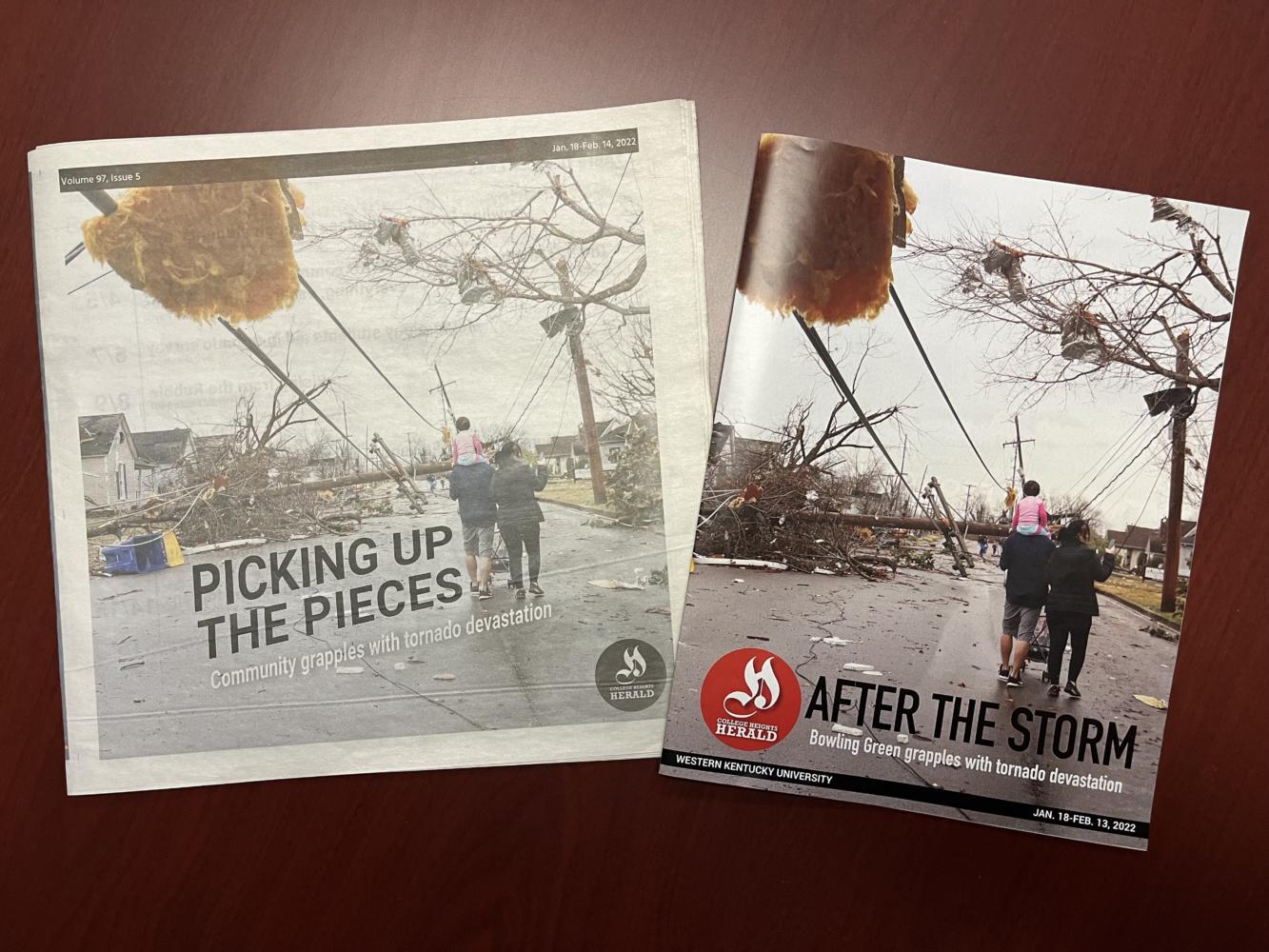 Change is continuous in the news business, and it has certainly accelerated during the pandemic of the past two years. And big change is once again coming to the College Heights Herald.

Beginning with the Fall 2022 semester, the Herald print edition will transition to a newsmagazine format. The Herald will move away from printing as a tabloid newspaper and into a true magazine with in-depth, exclusive enterprise that you won’t have already read on another platform, stronger photography and design, printed on quality paper that better showcases the students’ work.

It’s a big move, and a fitting next step in a rapid series of changes that began in March 2020 as the evolution of college media kicked into high gear. Throughout this sometimes messy transition, the Herald has been recognized as a leader in adapting to challenges:

It has been an amazing two years of rapid-fire change that has reshaped nearly every aspect of how the Herald works.

The growth and success of the newsletter, for example, means that it has become our new front page. On any given day more people are reading Herald content through the newsletter than would pick up a printed newspaper in an entire week – or, more recently, in an entire month.

Those numbers were an epiphany, driving home the fact that the Herald’s identity, especially among students, had become the daily email rather than the newspaper. That underscored how essential a digital-based, news-now strategy was for WKU’s best source for news and information.

In April 2021, it also led to the students’ decision to move the print edition of the Herald to a monthly publication instead of weekly.

It was an important move for a couple of reasons:

Still, print remains an important platform for the Herald. The quality of the exclusive enterprise journalism in those monthly print editions has been strong – for example, an in-depth report of what was hidden in WKU sexual misconduct investigations, an exploration of a reimagined hilltop that is in the process of forever changing the heart of campus, and a deep dive into the impact of social media on college students’ lives.

The students’ decision to move from a newsprint tabloid to a newsmagazine format came as the Herald’s printing contract, in which prices were set in 2012, expired and was put out for bid. The Herald had been printed for more than a decade in Henderson until 2020, when Gannett closed that printing plant and moved Herald production to The Courier Journal in Louisville. Gannett shut down the Louisville facility in March 2021, moving the Herald to its presses in Indianapolis. Gannett did not submit a bid to continue printing the Herald; the lone bid nearly tripled the cost for a newsprint tabloid.

In anticipation that our printing costs would go up, we also looked at other options with vendors who already have WKU contracts — including a magazine format from the Bowling Green-based Print Media, which is separately owned but operates out of the Bowling Green Daily News building.

A student-led committee looked at both options – newsprint tab and newsmagazine – side by side and had a strong preference for the magazine format.

In the end, the decision to move to a magazine will not only increase the quality of the physical, printed product, but will be more economical than printing a tabloid. Under the one newsprint bid we received, 3,000 copies of a 16-page newsprint tabloid with color available on all pages would cost us nearly 20% more than 3,000 copies of a 24-page (the content equivalent of a 16-page tab) full-color magazine on 50-pound stock.

So we are moving our print products – the Herald and our special sections – to a magazine format. To help balance the higher costs, the print edition of the Herald will move to three times a semester, one issue at the beginning and one at the end, with a mid-semester edition slotted in a way that makes sense – for example, at Homecoming in the fall. Special sections produced by our Cherry Creative branded content studio will be combined where it makes sense with the Herald, such as at Homecoming, but also can stand alone if the revenue potential supports that.

It’s another shift in a series of big changes for the College Heights Herald, and for WKU Student Publications as a whole. But that’s nothing new.

We started making significant changes in 2015, when we began planning to transition Talisman from the nation’s best yearbook into the prize-winning life and culture magazine and website it is today. We continued in 2018 by launching Cherry Creative, a branded content studio that has revolutionized our business operations. Along the way, we’ve moved the Herald from twice a week to weekly to monthly, launched a daily newsletter and, come this fall, we will reposition the Herald print edition as a newsmagazine with exclusive content that makes it worth reading.

Our students are excited about this change, and we hope you are, too. Our ability to be nimble allows us to be on the leading edge of how we distribute Herald news, information and advertising. And change keeps us fresh and always considering… what’s next.