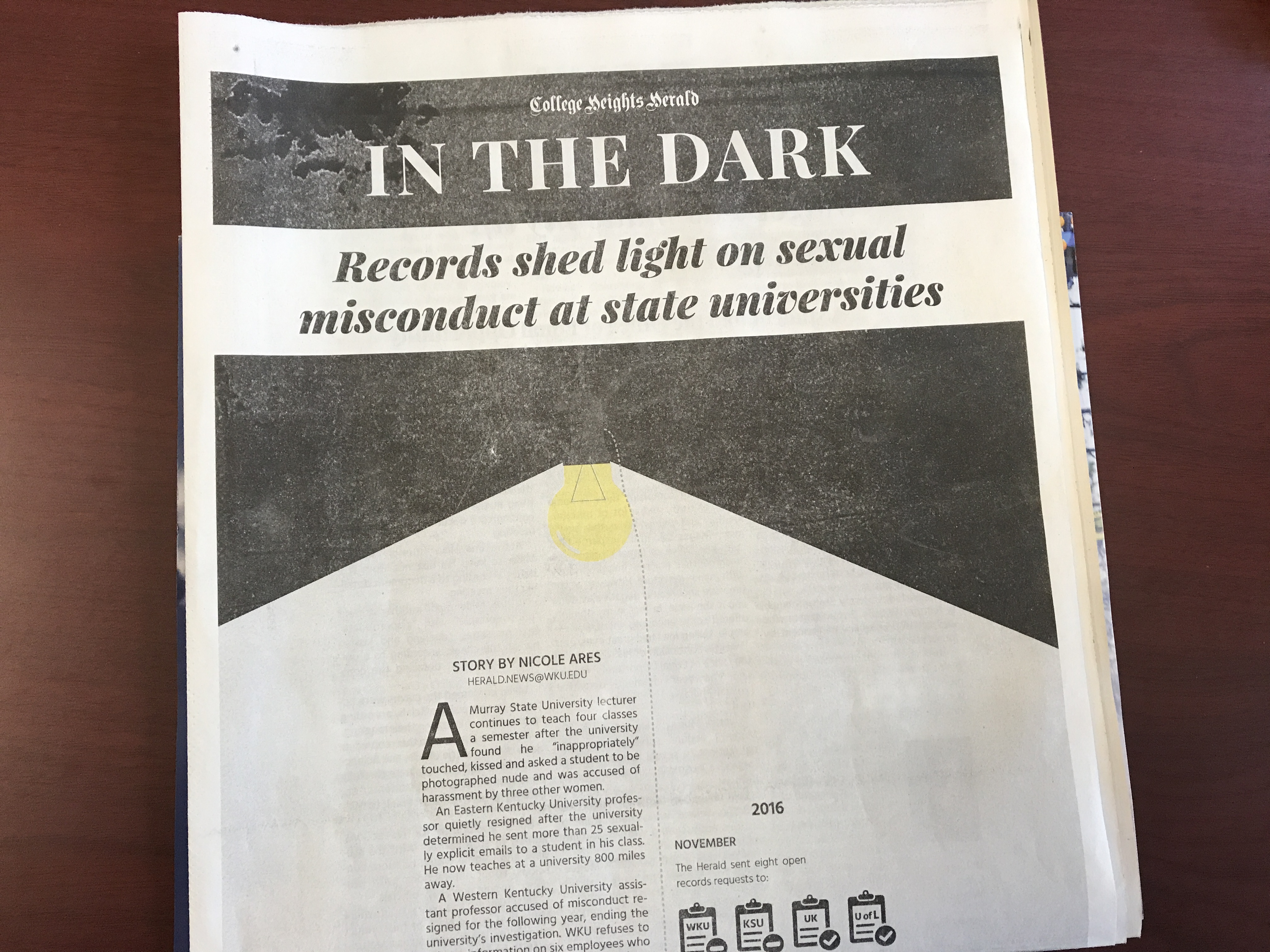 Ares and the Herald will be awarded the 2017 Betty Gage Holland Award by the Cox Institute for Journalism Innovation, Management and Leadership and the Student Press Law Center at a ceremony July 25 at the University of Georgia.

The award is for Ares’ work on the story “In the Dark: Records Shed Light on Sexual Misconduct at State Universities,” which the Herald published in a four-page special section on May 4. You can read the special report here.

Ares’ reporting on the story spanned most of the 2016-17 academic year, and included WKU suing the Herald over public access to records of sexual misconduct on campus.

Calling the story “outstanding investigative work,” Nsenga K. Burton of the Cox Institute said in an email announcing the award: “It was a difficult selection process as we had some very strong submissions this year. Your story, level of thorough investigation and dogged pursuit of the truth in addition to outstanding writing made your submission stand out above the rest.”

Ares, who graduated in May with a bachelor’s degree in journalism, was the Herald’s managing editor-digital at the time the story was published. She researched and wrote the story as the capstone project for her advanced reporting class, and was coached throughout the process by Amanda Crawford, an assistant professor of journalism in WKU’s School of Journalism and Broadcasting.

Ares, who is from Versailles, Kentucky, will attend graduate school thisd fall at the University of Amsterdam in the Netherlands, where she will study political communication.

“Being able to pull together this story … shows that persistence pays off,” Ares said. “It shows that important journalism is being done by student journalists.”

Ares’ story examined how Kentucky’s eight public universities react when a faculty or staff member is accused of sexual misconduct. In her research, Ares requested five years of records from each institution on cases in which the universities had determined there had been violations of sexual misconduct policies. Her request asked for records with any information that would identify the victims redacted.

Six of the eight public universities produced redacted records for Ares to inspect. WKU and Kentucky State University in Frankfort denied her request. WKU said its denial was an effort to protect the identities of victims of sexual misconduct and promote a safe climate for reporting infractions, and contended the records were private under federal law.

Ares appealed WKU’s denial to the Kentucky Attorney General’s Office, whose opinions on open records carry the force of law in Kentucky. The attorney general asked WKU to produce the records for private inspection, but WKU also denied that request. The attorney general issued an opinion that WKU had violated Kentucky’s Open Records Act and ordered to the university to provide the records to Ares.

WKU then sued the Herald in Warren Circuit Court, which was its only avenue under the Open Records Act to appeal the attorney general’s order. The case is ongoing and Warren Circuit Judge Steve Wilson in May ordered WKU to turn the records over to him, along with the legal justification for each element in those records that the university contends are protected from public disclosure. Wilson said he will review WKU’s submission and then set a formal hearing.

Attorney Michael Abate of Kaplan & Partners in Louisville is defending the College Heights Herald in the lawsuit. WKU is represented by Bowling Green attorney Thomas N. Kerrick. The attorney general’s office has intervened in the lawsuit on the Herald’s side.

The College Heights Herald is WKU’s student-run news organization, founded in 1925 and publishing in print twice weekly during the academic year and online around the clock, all year long. The Herald has been awarded the Pacemaker Award, the top national honor for student-run news organizations, 15 times and is a member of the Associated Collegiate Press Hall of Fame.

The Herald, which receives no direct funding from the university, is seeking donations to help with its legal bills stemming from the lawsuit. The Student Press Law Center in Washington, D.C., has established a fund for the Herald, and donations can be made here: splc.org/page/wku

The Holland Award is named for Betty Gage Holland, a long-time friend of journalism education at the University of Georgia. It honors outstanding college journalism, especially that which protects the integrity of public dialog on college campuses and uses “sunshine” laws and open records to allow people to see how the public’s business is conducted. In addition to the award, Ares and the Herald each will receive $1,000.