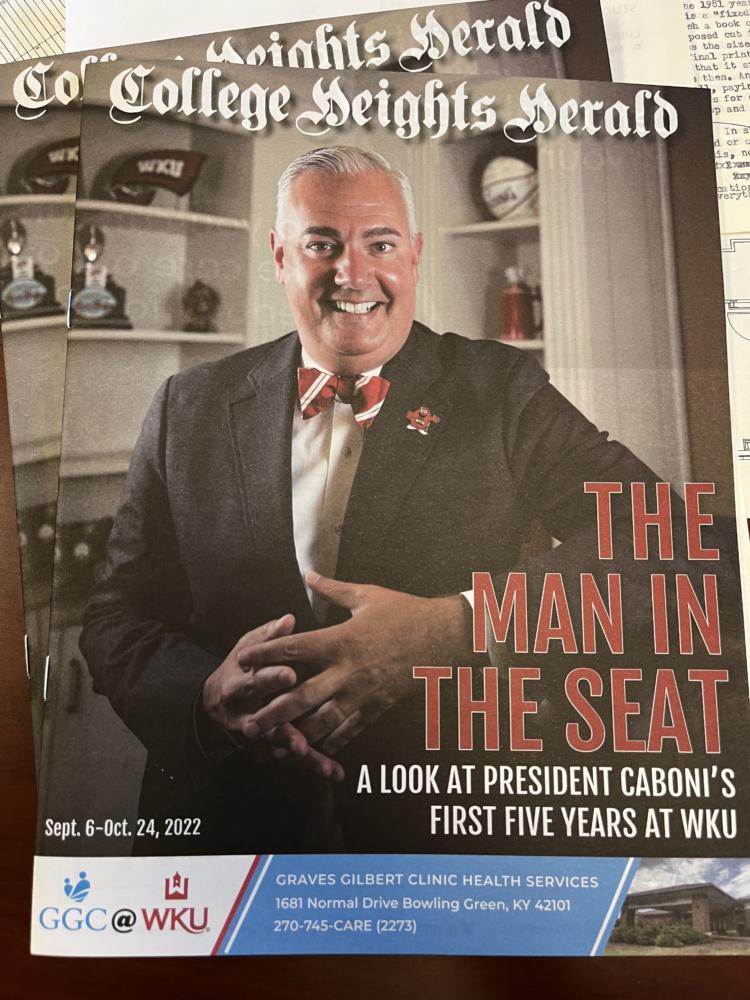 September 6, 2022 Chuck Clark
It’s out! The first ever issue of WKU’s College Heights Herald as a news magazine has landed on the Hill and is being distributed now throughout campus and the community.
The news magazine edition of the Herald replaces the old newspaper, which had steadily become less relevant on a campus where 18- to 24-year-olds dominate. The old paper’s role of delivering the latest news has been replaced by the Herald’s new front page — a daily email newsletter that goes to more than 35,000 subscribers every weekday during the fall and spring semesters and weekly during winter and summer breaks.
The students decided last spring to convert the print edition — something we all wanted to keep alive because of the invaluable experience it provides the students — to a magazine driven by news enterprise and in-depth storytelling.
This first news magazine issue features three solid stories — a deep and fair look at WKU after five years of the Caboni administration; how students were impacted from WKU’s decision to kill the once-strong Arabic language program; and visiting with the Harbaugh coaching dynasty 20 years after WKU won the Division I-AA national football championship.
But don’t look for these stories online just yet. They are magazine-first stories designed to give the WKU community great reasons to pick up the new print edition. They’ll go online, one by one, in a few days.
A side note: Thanks to Print Media, which printed the magazine here in Bowling Green — a first for printing the Herald at home in more than a half-century. After a nightmarish past year with our previous printer, this was a great experience.
I think this new magazine will hold strong value for the WKU community. Advertisers seem to like it much better than the old newspaper. And it looks great!
Congratulations to the students of the College Heights Herald for making the decision to do something hard but rewarding, and for a strong start to a new era.