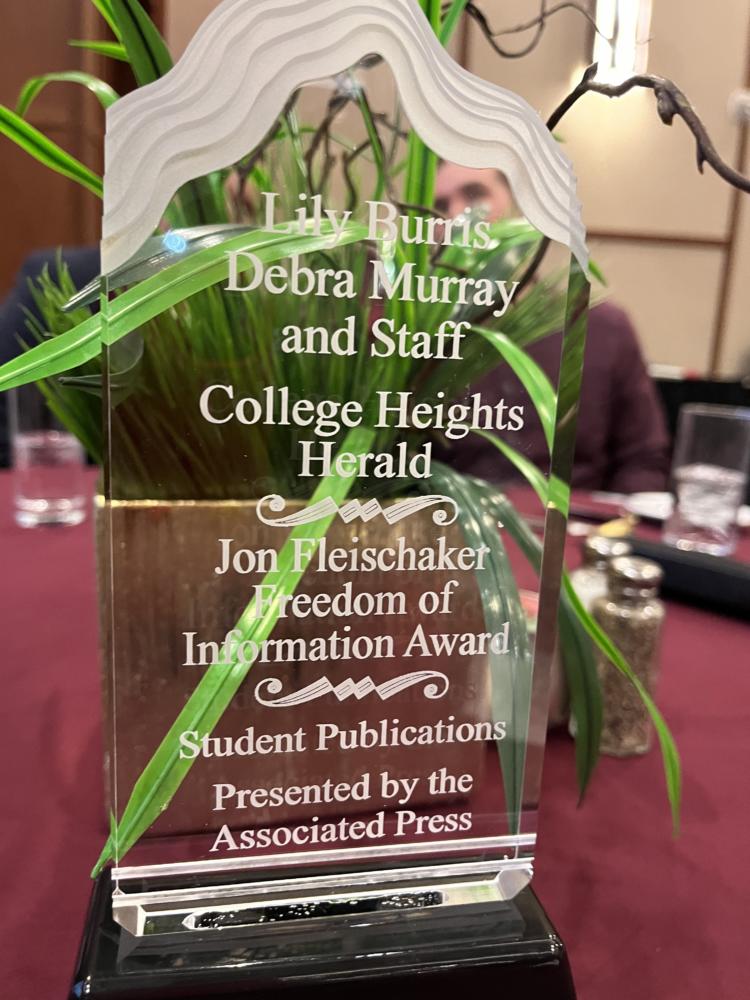 The College Heights Herald won the Jon Fleischaker Freedom of Information Award from the Kentucky Press Association and The Associated Press at the KPA winter meeting on Jan. 21.

It is the second time the Herald has won the Fleischaker in the three-year history of the award, which honors work that supports and uses public access to the proceedings and records of government agencies. The Herald also won in 2020. Both honors were for the KPA collegiate division.

Fall 2021 Editor-in-Chief Lily Burris, who graduated in December, and current Content Editor Debra Murray, a Louisville sophomore, along with the Herald staff, were honored for their September 2021 report, “Blacked Out: University redactions hide information from Title IX records.” 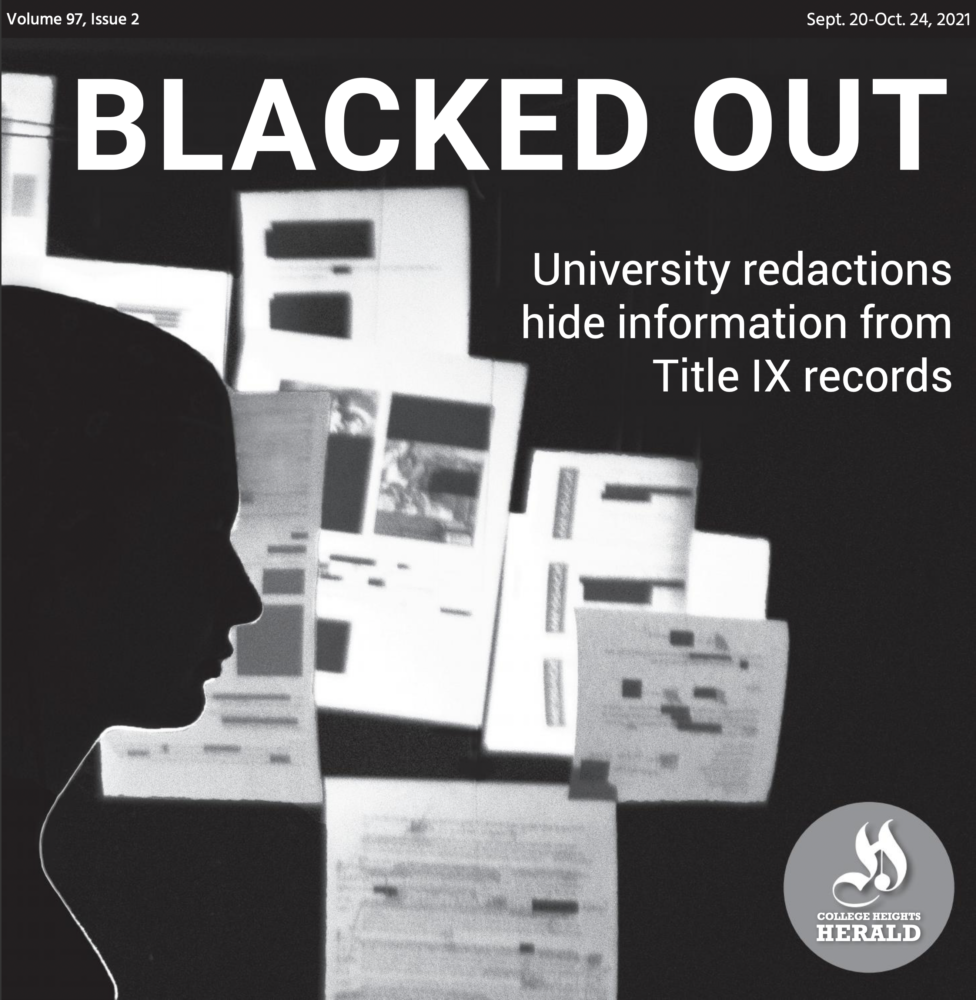 The story, published Sept. 20, 2021, represents a major step forward for the 2017 lawsuit Western Kentucky University filed against the College Heights Herald, its own student news organization, in an effort to keep documents related to WKU’s Title IX investigations secret.

Even though not a single student on the Herald staff during Fall 2021 was even yet in college when the lawsuit was filed in February 2017, the newsroom’s leadership knew the importance of this legal battle – and the grave implications it would have on the Kentucky Open Records Act if WKU prevailed.

The controversy stretches back to Nov. 1, 2016, when Herald reporter Nicole Ares filed open records requests with each of the eight public universities in Kentucky, seeking records related the sexual misconduct investigations involving faculty and staff against students. The Herald sought records that were redacted of information that would identify the students involved.

Six of the eight public universities complied, providing records with various levels of redactions. Only two – WKU and Kentucky State – refused to disclose the records. WKU also refused to turn the records over to the Kentucky Attorney General’s Office for its in camera review to see if the records had been properly denied. The attorney general declared that WKU was in violation of the Open Records Act and ordered the university to turn over the documents to the Herald. Instead, WKU appealed the ruling by suing the Herald.

The documents Ares received told a compelling story. Her work, published in May 2017, showed that Kentucky’s universities often treated cases lightly or swept them under the rug when faculty or staff engaged in sexual misconduct against students. It won multiple national awards, including News Story of the Year from Associated Collegiate Press; Best Investigative Story from the College Media Association; the Betty Gage Holland Award from the Student Press Law Center; and Enterprise Reporting in the Hearst Journalism Awards, considered the Pultizer Prizes of collegiate journalism.

Since then, WKU’s lawsuit against the Herald has languished in Warren Circuit Court. There hasn’t been a hearing in more than 2 1⁄2 years as the judge apparently waited for a similar, though narrower, case involving the University Kentucky and the Kentucky Kernel to work its way through the legal process. The Kentucky Supreme Court issued a resounding denouncement of UK’s secrecy in March 2021, prompting WKU to promise to deliver records to the Herald, even as the lawsuit WKU filed against the Herald was stagnant.

At that point, the Herald filed a new open records request seeking all similar cases from Nov. 1, 2016, to present.

WKU began producing those records during the summer, providing a handful of cases at a time. But the records were, in the opinion of the Herald’s legal counsel, excessively redacted. In some cases, WKU even redacted portions of its own policies, which are readily available on the university website.

Still, there was a trove of information in the documents WKU provided over the summer months – even if the details of what happened, who was involved and specifically how cases were investigated were obscured by redaction.

Herald students dug into those records. It took weeks to compile what information could be deciphered from the redacted pages. And they were able to tell a compelling story of what had happened on WKU’s campus regarding sexual misconduct over the past decade.

The September story did not close the book on the matter. WKU’s lawsuit against the Herald remains in Warren Circuit Court, and the Herald still contends that WKU has redacted the records it provided in a way that exceeds what is allowed under Kentucky law by not only redacting information that could identify students, but also keeping secret the names and departments of people involved in many cases, broad passages of descriptions of what happened and other areas that the Herald contends ought to be public.