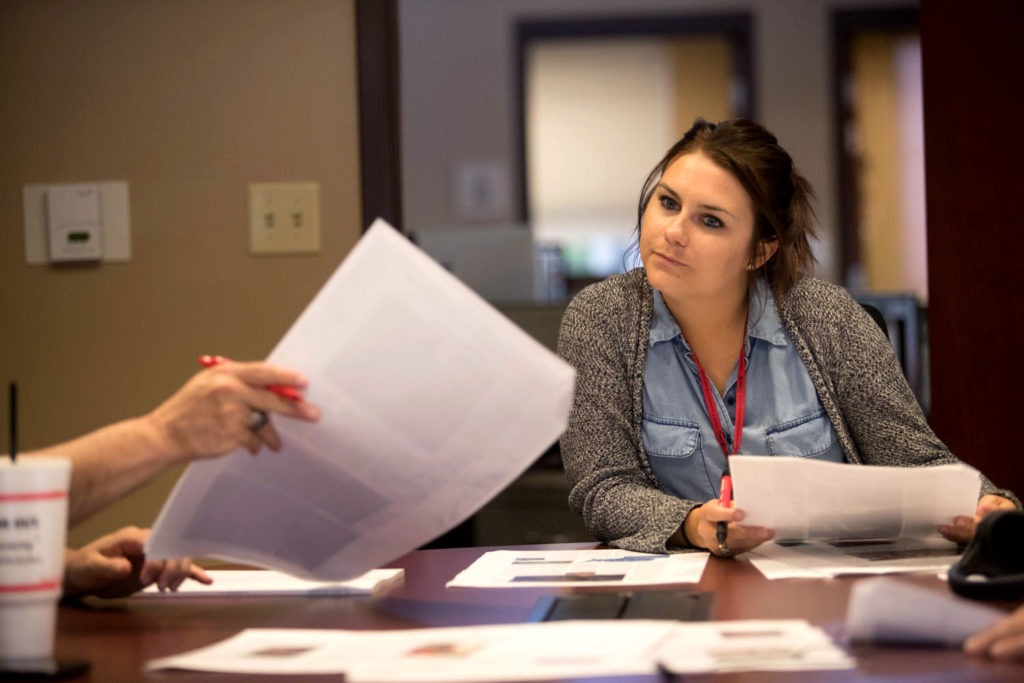 College Heights Herald alumna Kayla Golliher works as a journalist behind the scenes, sorting through photos and content, and experimenting with design to appropriately display the news to the public.

Golliher graduated from WKU in 2012 and began her design career two weeks later at the Gannett Nashville Design studio as a designer for the Florida Team. Golliher transferred to the Louisville studio in 2015, and she nows work remotely from Austin, Texas for the studio as a lead designer for USA Today.

“The best part about the studios is sharing a room with 50+ experienced, talented designers,” Golliher said. “I’ve been so lucky to work with and bounce ideas off of the best in the business.”

One of the first big news packages she designed was the coverage of the Boston marathon bombing, she said.

“I will never forget the awful feeling of flipping through photos of such devastation, something I’ve done many times since then,” Golliher said. “You never become numb to it, but you have to tell yourself this is why you are here.”

Golliher first became interested in journalism after accidentally enrolling in her high school newspaper class. Golliher said she had always loved writing, but soon found out how different journalism was from different forms of writing.

“I got a D on my first design assignment,” Golliher said. “Hilarious to think that became my career. I fell in love in journalism and newspapers that freshman year and never gave anything else a chance.”

Golliher said she sticks with it, because she genuinely loves what she does.

“It’s no secret the pay isn’t great, you work holidays, nights and weekends, and there is a pretty high risk of getting laid off,” she said. “If you don’t love it, it’s easy to move on to something else.”

Golliher said the most difficult part of as a journalist is watching great co-workers get laid off due to cutbacks.

“It’s a worry that is always in the back of your mind,” she said.

In college, Golliher said her dream was to live in Nashville and design the Tennessean because her family is from Nashville, so she grew up reading the Tennessean. Now, she works at one of the largest publishing companies in the nation.

“If you asked me while I was in college if I’d see myself designing one of the top newspapers in the country, absolutely not,” Golliher said.

While at WKU, Golliher majored in news/editorial journalism and minored in nutrition. She said she was also interested in health and thought about becoming a nurse but chose to focus on journalism. She worked part time as a server and also at the Herald as a designer and writer. Golliher was the design editor for the Herald from 2008-2010, and worked as a managing editor during her final semester in 2012.

“I stayed pretty busy throughout college and kind of kept my head down and worked hard,” Golliher said. “I didn’t spend my time at parties or football games, I was the nerd in the student pub office until 3 a.m. twice a week.”

Golliher said working at the Herald was the best preparation for a career in journalism. She said she uses the skills and tricks she learned at student publications every day.

“I felt like I went into my career with a leg up on others who didn’t have those same experiences,” she said.

Golliher said she also met a lot of of great people while at Student Publications including one of her best friends whom she is still friends with, and mentors like Jan Diehm, who now works at CNN.

However, the most important thing to come out of her time at WKU, she said, is Bob Adams, or Mr. A.

“There aren’t words to describe what he has done for not only me, but so many people who have walked through those student pub doors,” Golliher said. “Having someone like Mr. A on your side makes life so much easier. I credit my career to him.”

Golliher said college is the time to network and make lifelong connections. Her advice to students now, is to find that person, to find their Mr. A.

“Find someone who will try to teach you everything they know, correct you when you’re wrong and fight for you to succeed,” Golliher said. “…It is so important to build relationships and be able reach out to those people for future opportunities. In order to do that, be involved an organization, like the Herald or Talisman. Have fun in college, but ultimately, you are there to build your future.”