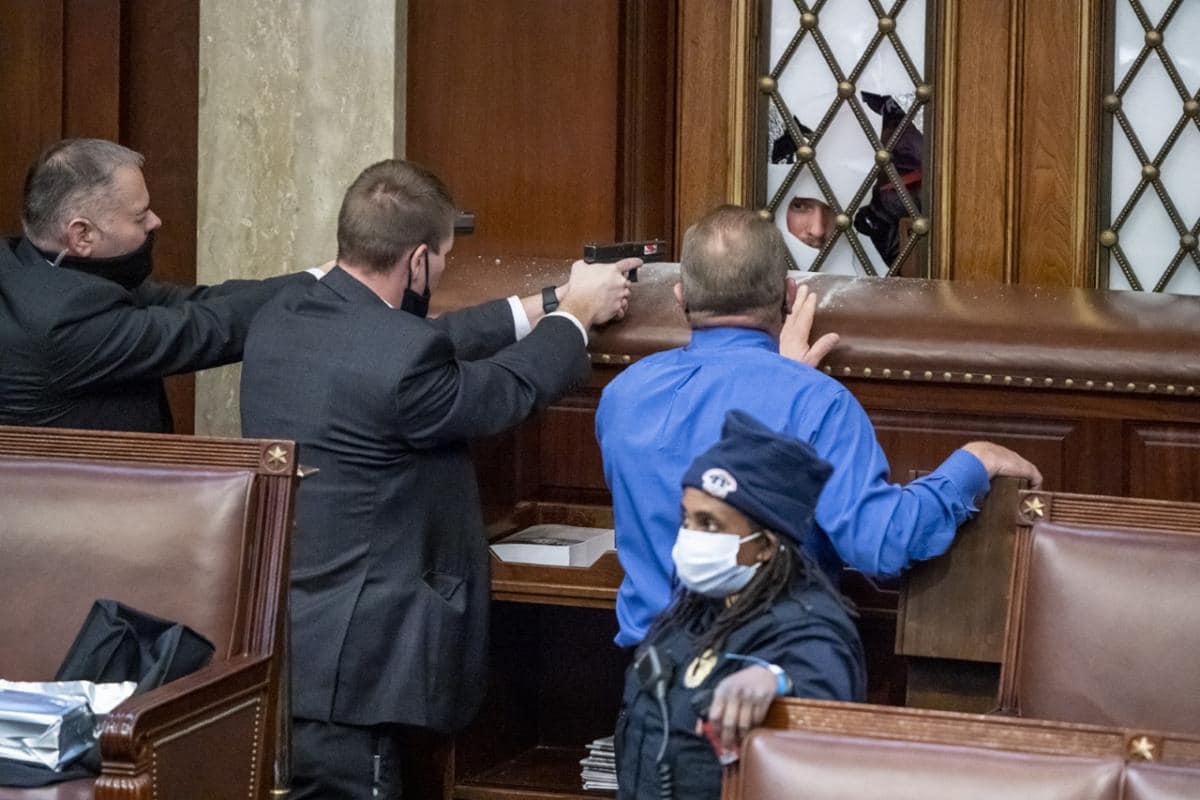 The following was taken from a Facebook post by Chuck Burton, a colleague of J. Scott Applewhite, a former College Heights Herald photographer and two-time Pulitzer Prize winner, now working for The Associated Press.

The following is a first person report on [the Jan. 6] events by AP Photographer Scott Applewhite. Scotty is the AP’s main photographer in Congress and has an office in the building. He also had celebrated his 40th anniversary with the AP the day before.

When the breach of the Capitol was announced during the Electoral College certification, the Capitol Police began to prepare lawmakers and the rest of us in the chamber for evacuation. It was an uncertain process – evacuate to where? The mob was on the other side of the doors.

Eventually, the officers announced that tear gas had been deployed in the nearby Rotunda and all were instructed to don escape hoods that were stashed under the seats. That was part of the preparedness in the wake of 9/11. I didn’t put one on because #1 I couldn’t see to use the camera and #2 you have to be able to hear during an emergency.

The officers loudly commanded everyone to evacuate, stragglers were not tolerated and were forced to leave. (Fellow AP photographer) Andy Harnik bravely lingered as well and made many important and storytelling images.

He and I were both in the balcony that overlooks the House chamber. Andy had been on a side of the balcony where some members of Congress were watching and there were a lot of police near him. I had been on the opposite side with about 30 reporters and photographers – naturally, there were no officers in our midst.

The officers eventually pushed everyone out, Andy must have been among the last. He said the final frame he shot in the chamber was the one of me sitting alone in the House press gallery.

The Capitol is where I work every day – I am a familiar face to most of the police. When the cops on the chamber floor shouted up at me to get out, I just told them I was fine and refused to leave. This is the AP – we stay and report.

One got more belligerent until another officer intervened, a special agent in the protection division who guards the leadership. He shouted over: “Scotty’s OK!” leave him! Two words is all it took from the special agent. That and the obvious – they had their hands full with a mob on the other side of door.

From that point on, I was the only journalist and the only person remaining in the balcony to witness the chaos in the House chamber.

I was pretty sure I was right where I was supposed to be – I kept my lens focused on that door and waited for the breach. When the mob began to break the glass in the door, I could barely see the face of one of the rioters. The cops and a new congressman with a law enforcement background tried to de-escalate the situation – their guns were drawn and pointed at the hole in the glass.

The growl of the mob could be heard on the other side but the officers in the chamber were focused and quiet with sidearms aimed — I was trained on the door as well.

The new Sony a9II digital cameras we are using now can transmit the photos directly to the AP without having to use a laptop – all I have to do is push a button and the images fly over WiFi. I was moving as many images as I could, well aware that if I delayed, my cameras could be destroyed by the mob, or confiscated by the police.

The room was pretty dark. My exposure was: iso: 10,000, 1/60th of a second at f/ 6.3.
The lens is really for use outdoors for shooting sports or wildlife, but I had brought it along for a little extra reach – closeups of faces and details during the Electoral College vote which was illuminated with tv lights – during the attack, the room was much darker.

On Wednesday, I was working directly with veteran Washington photo editor Jon Elswick who was very patient with me and expedited my photos to the wire. Photo editors Wayne Partlow and Jenny Kane were juggling the incoming images also. The editors updated the captions and relayed them to the AP photo network.

I say that Jon was patient with me because I was sending a lot of pictures in a short time – this is not good form usually on the part of the photographer – we normally use some judgment and discretion in how many we send in a short time so that the photo desk isn’t overwhelmed.

But, in this case, I told Jon I was going to move as much as I reasonably could. My previous experience in conflict zones and working around the military and police reminded me that my cameras might be destroyed by the mob or my disks confiscated by police. The ability to transmit from the camera insured that AP would get the photos.

The siege at the House chamber door lasted about 45 minutes in all. The invaders were eventually moved from that corridor by tactical units. I was then able to move around the balcony above the House floor to record the deserted room and the debris. I was locked in the chamber for another two hours before an FBI tactical team finally swept through the area I was in.

The joint session of the House and Senate resumed about 9 p.m. and the Electoral College proceeded. Andy Harnik and I persevered through the night and finished coverage about 3 a.m. I went back to my office in the Senate Dirksen building, ate some soup, and slept from 5 a.m. to 7 a.m., then we started the next day’s coverage.